“That’s bull. There’s no pipeline problem.”
That’s how Bernard Coleman, head of diversity and inclusion at Uber, responded when asked at a June TechCrunch Sessions event whether the lack of gender diversity in tech was due to a shortage of qualified female candidates.

Still, despite well-publicized diversity efforts and many hiring managers being eager to bring women on board, female tech employees are outnumbered more than four to one at Google, Facebook and Uber. Sadly, average gender tech diversity is even lower.

Clearly, there’s a big problem. Far too few female tech candidates are being submitted to hiring managers. In this post, we offer some suggestions for how technical recruiters can increase the gender diversity of the candidates they deliver.

Prioritize Gender Diversity in Sourcing
Coleman said that recruiters must expand their “playing field” to find where talent from underrepresented groups congregate. In terms of gender diversity, recruiters often aren’t looking where women IT talent can be found.

He noted how it’s important to set up relationships early with underrepresented groups, such as women. He pointed to Uber’s recent university recruiting roadshow at historically black colleges and universities (HBCUs), Hispanic-serving colleges and women’s colleges as an example.

Another great resource is the tremendous site HireMoreWomenInTech.com. It offers a list of more than 40 women’s tech communities.

Plus, the site notes that it’s important to write women-friendly job descriptions, and offers several great examples of how to do so. “Own the responsibility of actually getting the word out to the widest pool of candidates possible,” HireMoreWomeninTech.com states. “If you’re only getting male candidates, perhaps the problem lies with either how you’re describing the position, or the pool of candidates who are actually seeing the job post. And of note: if you have an employee referral program, it may make sense to review whether it actually  works to get you a diversity of candidates (or violates US law).”

Make Interviews Female-Friendly
Oleg Vishnepolsky, Global CTO for DailyMail Online and Metro.Co.Uk, told a highly revealing story recently on LinkedIn. His company hired a woman—the wrong woman—because she had a similar name to the ideal candidate. A bad mistake, but despite being rejected based on her interview, she turned out to be a “great worker.” Vishnepolsky said he asked her later about her interview, and “she simply said that we made her nervous.”

His takeaway: “I do wonder how many people get rejected this way? Most people get nervous during interviews, by unfamiliar people and surroundings, by pressure of the interview and some of the questions that get asked. We need to make candidates comfortable and relaxed, but more importantly focus on the past track record.”

We agree completely. It does strike us, however, that women could be disproportionately impacted by interview pressure given that tech teams are so male-dominated. The tweet below shows the problem well. 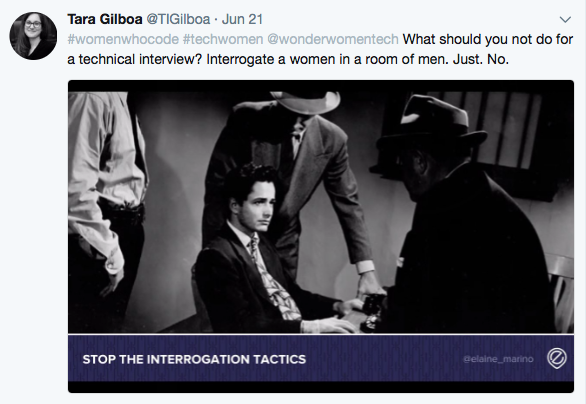 Here are some suggestions for making your technical interviews female-friendly:

We Can Do Better
The technical recruiting industry clearly can do more to increase gender diversity. And while the suggestions above won’t fix the entire problem (likely far from it), by continuing to work to give more opportunities to women in tech, our industry can and will make a difference.