“It’s not all IT:” Decoding what type of tech professional a hiring manager wants 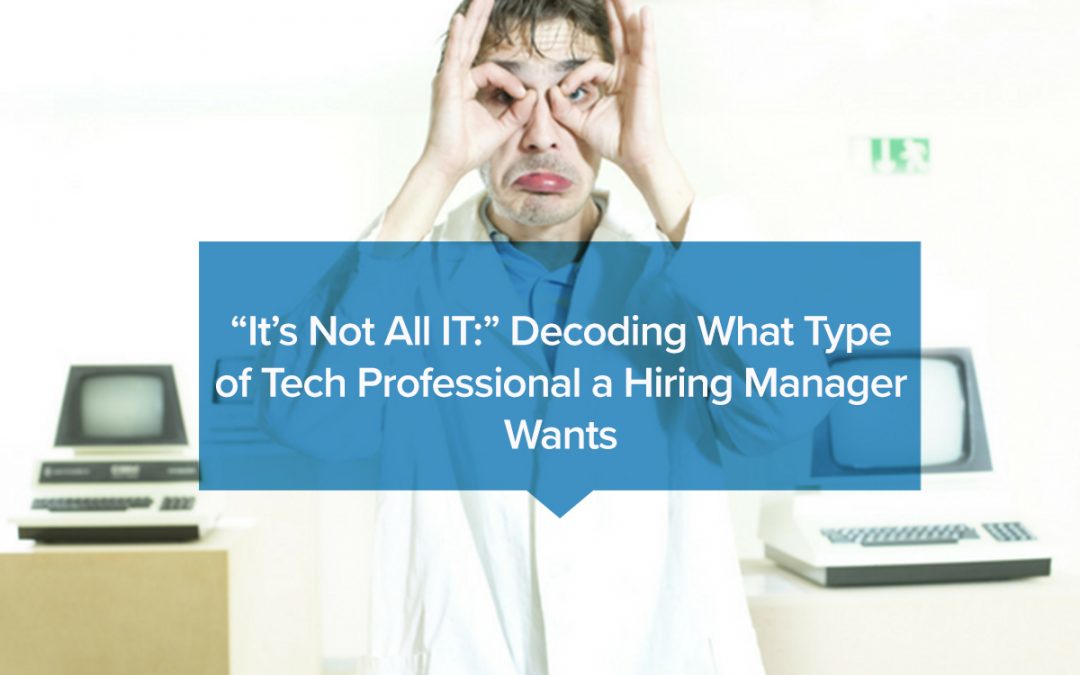 Recruiters need to be aware of “false positives” in their process, and how to weed those candidates out in the early stages. One of the major sources of false positives is not understanding what each type of IT degree conferred might represent.

I went to school in the United States, and have worked there as well — but I’m currently based back in India. India is obviously a global IT hub and is used often as an outsourcing area for U.S.-based tech companies.

In 20+ years of working on different software projects between the two countries, I’ve seen a lot of confusion at the recruiter/hiring manager level around what different degrees mean — and what that means for the type of person you are actually trying to get within your organization.

Let me break this down as best I can and hopefully help some recruiters in the process.

The four main types of U.S. awarded degrees:
These tend to be:

There are others, yes. And some universities are getting more specified with data analysis degrees. But in general, these are the four buckets.

Computer science is one of the oldest degrees. The whole industry started with this one — the term “information technology” hadn’t even been created when computer science degrees were initially awarded. CS degrees in the 50s and 60s were primarily focused on theories of computers and trying to advance the knowledge of the field. Computer science students did much less practical work and more theoretical work.

As time progressed, that degree evolved into something different. The cool concept is that there’s still a lot of rigor around the theoretical aspects of the computer — data structures, trying to make algorithms more efficient or find better algorithms. These are theoretical pursuits.

As such, a computer science degree recipient usually has a strong scientific bent of mind and wants to make the underlying processes better and more efficient.
But see, that’s a theoretical, longer-term structure.

A lot of times, a hiring manager wants someone who can come in now and execute on projects. That’s not necessarily someone with a computer science degree.

Rather, the most generalized of these four degrees is Information Technology. A person with that degree has a broader skill set and can enter with more practical, project/task-based workflows.

Software engineering degree students tend to mix the theoretical rigor of computer science with a degree of “soft skills” too, and can often be the real target when a hiring manager says they need someone with a “computer science” degree.

The India-U.S. problem
In India, the terms “computer science degree” and “information technology degree” are often used interchangeably on resumes. This is where false positives can begin to be identified.

There is often a large mismatch between the listed skills and the degree, especially on resumes of Indian candidates.

This is why you need professional vetting of candidates to see what they actually know, understand, and have worked on — because how the U.S. defines one tech degree and how India defines it are often very different.

Hiring managers who don’t come from tech backgrounds…
… sometimes can say to their recruiters “It’s all IT.”
But it’s not.
Each of these degrees is a specific set of skills, and each degree attracts different types of people in terms of the work they want to eventually focus on.

Because “computer science” can be a big catch-all term, many hiring managers assume they want that — but they also need someone who can hit the ground running and execute. A CS degree student probably isn’t interested in that; they wanted to spend months or years improving the effectiveness of algorithms and data structures, and the hiring manager might not have that kind of time.

You need to understand what each degree means within the ecosystem of tech, and guide your hiring manager towards “No, what I think you want here is actually…”

This will bolster your relationship with hiring managers (positive), get the best candidates in the door (positive), and make sure there’s a healthy mix of executors and long-range thinkers on a team (a third positive).

If you have questions about whether X-candidate has specific skills or long-term interests, consider using the eTeki platform, as third-party technical vetting is one of the safest ways to ensure you’re getting what you need in the door.

Surendra Pepakayala
A hardcore hacker leads our XprTeki Network for technical interviews. He was the head architect at Selectica when their eInsurance Tech Suite was acquired by Accenture.