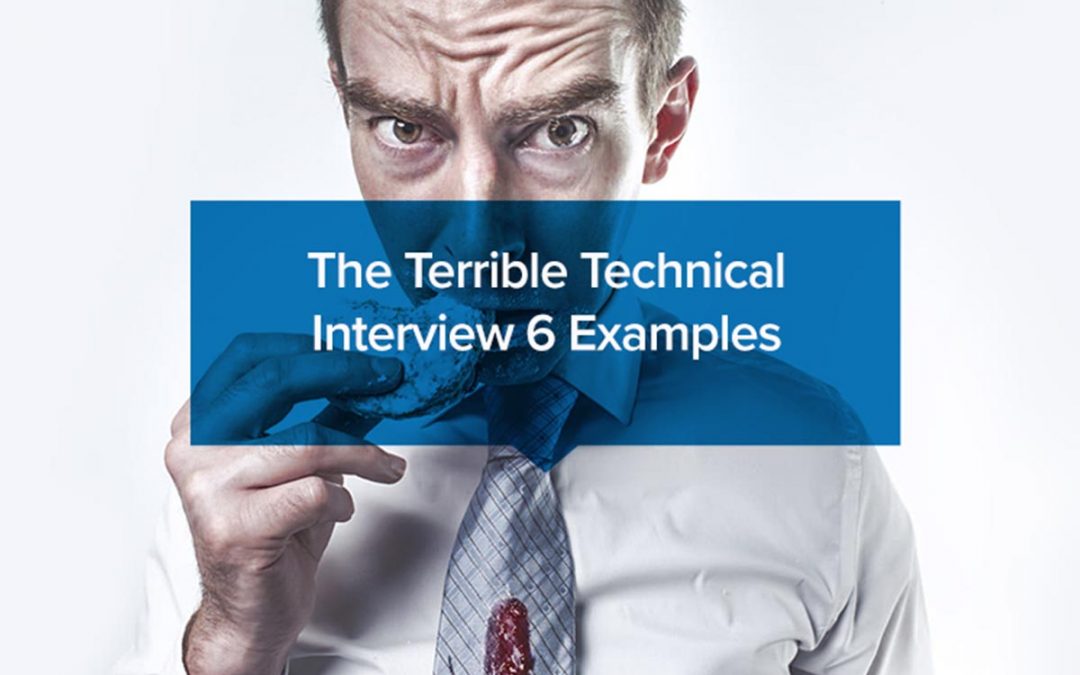 In the case of tech, the result of a bad hire is staggering. There are financial reasons. SHRM has estimated that the cost of a bad hire could be as high as five times the amount of the bad hire’s salary. Assuming an average IT salary of $100,000, the cost could be $500,000 per bad hire. terrible technical interview

There is the loss of morale and productivity that comes with a bad hire.
And missing out on that exceptional candidate who should have been hired in the first place.

The following six examples illustrate pitfalls that can occur during the technical interview process – and some tips to avoid them.

A recruiting manager hired an IT candidate primarily because of the individual’s Project Management Professional (PMP) certification while ignoring another candidate with ten years more experience but without the PMP certification. Things didn’t work out. terrible technical interview

Lesson learned?  Don’t outright reject applicants, and discount their experience and accomplishments, just because they don’t have the right degree or certification.

Lesson learned?  This could have easily been avoided by using video interviewing technologies, like collaborative whiteboards, to improve the interview and avoid a candidate experience train wreck.

Insulted by a recruiter’s ill informed questions, an IT candidate suggested they would prefer being interviewed by someone who understands IT and could ask more challenging questions. A little arrogant? Possibly, but not having the right interviewer can prevent you from hiring the best candidate.

Lesson Learned?  If your recruiters don’t have the technical experience and knowledge to screen candidates for technical positions, consider outsourcing your technical interviews to a company with the technical know-how, like eTeki.

After just one phone interview and no in-person meeting, John was hired. Almost immediately, the team realized a terrible decision had been made. The interviewer, in retrospect, realized he ignored warning signs during the interview process in his haste to fill the job.

Lesson Learned?  Research shows that hiring on ‘gut’ instincts alone results in a high hiring failure rate.  And there is the potential for unfair bias.  But never ignore your instincts.  Be aware and curious of your hunches. It usually means that you need to do more due diligence.

Lesson Learned?  Don’t fall victim to the Fear of Missing Out syndrome (FoMO). Holding out to find a better candidate for a little less money rarely works.  Don’t let a few dollars come between your technical job opening and the best candidate. Pay them.

After a candidate for a highly technical position got past an initial screening by a recruiter, a major bank scheduled a phone interview with the candidate to assess culture fit.  After phoning in for the interview, the candidate was greeted by seven panelists!

Lesson Learned?  Too many meetings, too many interviewers in one meeting, not enough breaks in between meetings. Don’t overwhelm candidates.  The best applicants are likely to walk or won’t be given the opportunity to showcase their skills. terrible technical interview

To avoid these scary situations and others, consider outsourcing your technical interviews to service providers such as eTeki.  They will schedule candidates for interviews within 24 hours with external IT pros who are certified in technical interviewing. These interviewers use best practices so candidates’ skills are appropriately compared and compliance is ensured.