As recruiters, we’ve all been spooked a time or two by candidates or clients from hell – that organized, experienced data analyst that ended up ghosting us after we wooed her for a hard-to-fill position or the Ward-Cleaverish accounting executive that turned into Freddy Krueger when we couldn’t fill his hiring quota quickly enough.

Bolt the door, pop some popcorn, pour a stiff drink, and set a spell. We have recruiter horror stories of our own to share. If you frighten easily, best to leave the lights on.

When I worked for an agency, Fridays were casual. One particularly work-crazed week, I ran out of time to do the laundry. On Friday I donned one of my few clean T-shirts – the one with the big, bold “Unemployed” graphic on the front. The unemployed candidates I interviewed that day were not happy! It was a looong day. 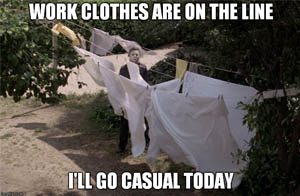 On the way home, I had a flash of insight: “I could have turned the shirt inside out, or just gone shirtless!”

(Probably would have been a different nightmare on several levels, however.)

My recruiting horror stories started with my first recruiter role was for a major greeting card company. I hired the folks that stocked cards on the store shelves. As part of the pre-screening process, applicants completed an automated phone interview that included their recorded response to a series of questions.

Reviewing the responses was mind-numbingly tedious, until the day that Sam morphed into Sibyl.

The man we’ll call Sam had applied late the night before. I was listening to the next morning, to some rather mundane replies.

“Yes, I have open availability.” 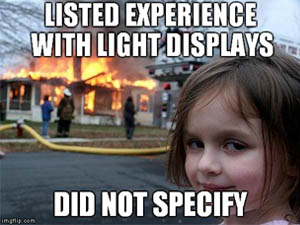 “Yes, I have retail experience.”

I was growing weary.

Then, question six. Sibyl had arrived. Suddenly, a woman’s voice was replying to the questions.

No, he hadn’t really morphed. He’d handed the phone to some helpful female, in hopes that I wouldn’t notice.

“Well, it was bound to happen…, 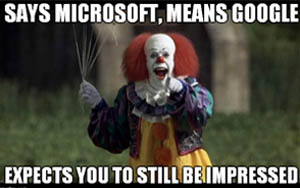 “Hi [candidate] this is Amy from Microsoft calling – no wait! Google! I’m from Google!’”

Whoops. My mind had momentarily transported back in time to my former gig.

Luckily, he had a sense of humor about it. It turned out to be one heck of an icebreaker.

One of the Mama’s Boy’s recruiting horror stories:
I had spent five strenuous months trying to fill a New Jersey-based position for an orthopedic surgeon. I was excited. It was a big job but a great one, with even better money. The candidate I was now wooing was exactly what my client was looking for, and although the deal had a lot of moving parts, it was all coming together nicely.

I had talked with the candidate, his spouse, and even his old partners for dozens of hours.

Now, everything in place, the contract was in his hands, awaiting his signature.

Then, after 10 pm on Saturday before the contract was due, the phone rang. It was my candidate, who bluntly said he was not allowed to take the position.

I was stunned, pissed off, and very anxious.

“What happened?” I asked. “Is your family no longer interested?” That would have surprised me, as they were about to move from a rural neighborhood to an upscale suburb. His kids loved it, his wife loved it more, and I knew for a fact that the candidate loved it and was getting more from this job offer that he had asked for.

“Did I miss something?” I wondered. “Did I make a mistake?  Did my client do something last minute that I was unaware of?”

His reply was calm, matter-of-fact.

“Noel, my mother doesn’t want me to take the position.”

Surely, I hadn’t heard him right.  I launched into my practiced techniques meant to understand his decision. I ran through how far we had come, reminded him of how great a situation it would be for him, his family, and the hospital.

Then I heard the howling of his wife in the background. 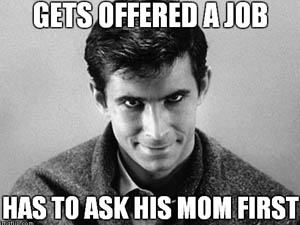 “You tell him. You tell him now, or I swear I will walk out the door right now!” she yelled.

This experienced surgeon, this intended Director of Orthopedic Services, said, “My mother brings me lunch every day, but the new hospital is too far for her. She told me not to move.”

My bad for not qualifying mom.

Not A Ghost After All

I have several recruiting horror stories. One of them was, when I was recruiting for pharmaceutical sales representatives, I had one candidate who called before her final interview to ask if I could reschedule. Just minutes before the interview I could hear the tremor in her voice. Gone was the cool, calm, collectedness that I’d experienced in working with her over the past month.

She was complaining of tense stomach pains. I could hear the sweat on her brow. This wasn’t good. Knowing that if she canceled the interview at the last minute, she would likely be out of consideration. Against my best inclination, I convinced her that it was in her best interest to go through with the interview and do everything she could to make the best of a bad situation. 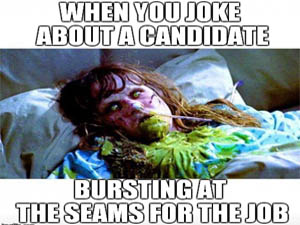 She decided to go for it. An hour passed, and then another. I reached out and my call immediately went to the candidate’s voicemail. Just as I finished leaving my voicemail, the hiring manager called to let me know that they intended to move forward and wanted to make her an offer. I was elated that she’d gotten the offer, but I was wondering what happened to her. The hiring manager asked if he could make the offer. He couldn’t reach her either. The day passed and neither of us heard from her. Then another day passed. Heading into the weekend, I was concerned; after all, I thought I’d built a pretty good rapport with this candidate. Had I pushed her too hard?

About a week later, I got a call from her. Her appendix had ruptured shortly after the interview and she’d spent the week recovering in the hospital. I felt like a complete jerk for asking her to go through the interview. As soon as I heard from her, I called the hiring manager to get him to reconsider her. Relieved that the candidate hadn’t ghosted him, we put together and put an offer quickly.

Double the Fun: Not!

As a recruiter the most time-consuming part is sourcing & interviewing the shortlisted candidates. When you source and think that you found a great candidate, only to call them for an interview and the answers are too perfect and too good to be true. Think twice before moving ahead. 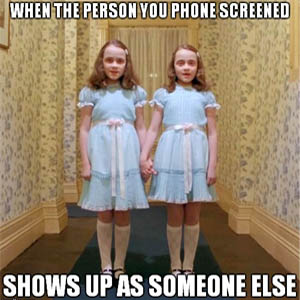 I was interviewing a COGNOS developer for a local project for an insurance company in NJ. This was a project we were implementing and he was going to work at our office.  I was thrilled and so forwarded the resume to our Data Architect to interview the candidate who was thrilled that we found a great candidate after a quick phone screen.

But something did tell us that something was not right, so we decided to VERIFY. We asked to do a video interview through Skype. The candidate interviewed and performed well, but we didn’t want to take a chance because some of the answers to the questions were beyond the years of experience the candidate had.  So, we asked them to come into our office the next day from Easton, PA and fill out an employment application. The admin comes to my office and says “I’m not sure why you brought this person in. He can’t even understand some basic questions.” So, we asked the candidate to come into the conference room to discuss  The same questions from the night prior were discussed and they couldn’t even remember 5% of the questions asked. The light bulbs went off and more importantly, we wanted to know how they pulled off this HOUDINI ACT on Skype.

Since they had just filled in the application & signed it, we told them it was falsification and we were going to pursue this further. The candidate was in tears and began to spill the beans. Indeed, someone else had answered the interview questions.  This was my first experience with bait and switch candidates, some 10 years ago, but I can remember these recruiter horror stories like it was yesterday.

Ryan helps create the processes, ideas, and innovation that drives RecruitingDaily. He’s our in-house expert for anything related to sourcing, tools or technology. A lead generation and brand buzz building machine, he has built superior funnel systems for some of the industries top HR Tech and Recruitment brands. He is a veteran to the online community and a partner here at RecruitingDaily.